this was a fun little test i did after my final review at Disney. the following week there was nothing really for us to work on, so i felt like doing an animation, something with cool gymnastics (which i new a little bit about having done it for ten years), which led to putting live action behind it, which then led to motion tracking, and so on...twas fun, and now i wanna do another one real badly, one with more story and acting. i started putting sound behind it, but maybe later i'll do that. my end date at work is the 27th of March, so i'll be patient till then before i attempt new experiments...enjoy. cheers! 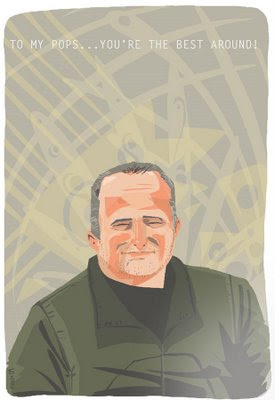 this one is for me pops...three years yesterday he left and moved on to happier days. one of the best men i knew. during his time he showed his kids the beautiful characteristics of love, compassion, strength, and courage...all of which i'm continuing to learn. thanks pops for everything...especially the green eyes and long eyelashes...the girls really go for them haha...
Posted by philip vose at 1:09 PM 3 comments: