when i was a kid my mom use to airbrush x-men characters onto t-shirts for us. she'd steal comic cards out of our collection binders and recreate the characters onto something we could wear. i knew what she was up to when i heard the air compressor running in the garage. i'd sneak in at nights to see the process. it made me happy. thanks mom. 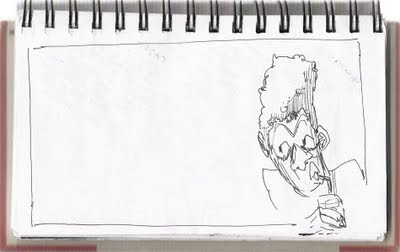 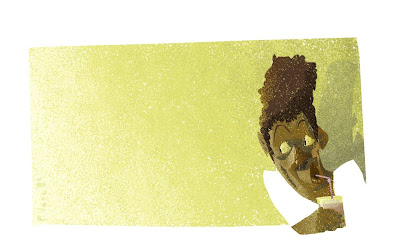 same bar, different day. maybe the big guy and the dull girl in the middle of her friends have something in common...they don't like where they are, thus the bleh-like face expressions. 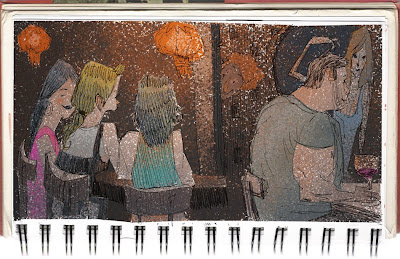 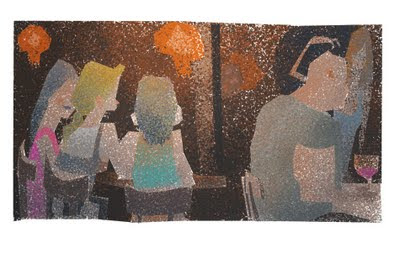 return of the prodigal son 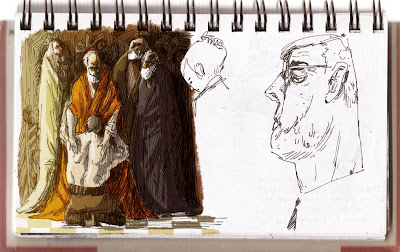 it's no rembrandt, but i was thinking about his version at least when drawing it. it's kinda an interesting study looking at a painting for a few minutes, then hours later redrawing something that's really influenced by it. next time maybe i should study it more precisely. see what happens. hmm
Posted by philip vose at 10:11 PM 2 comments:

art runs in the fam.

this is just a little taste of what my siblings, ben and kirstin vose, can accomplish when they put their art skills to the test. both very different and wonderful. the best part about these is they were gifts...my brother crafted this beautiful dresser for my sister. and my sister created this beautiful drawing along with a lovely note for me. i'm a lucky brother! 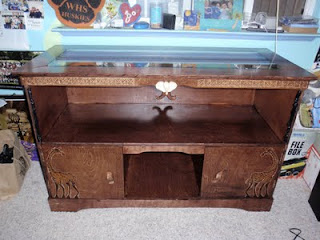 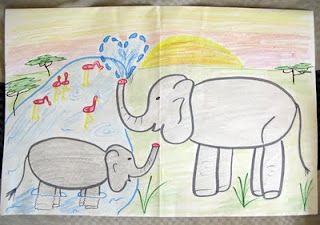 Posted by philip vose at 8:10 PM No comments:

this is from one of my more enjoyable bars, GoodLuck. 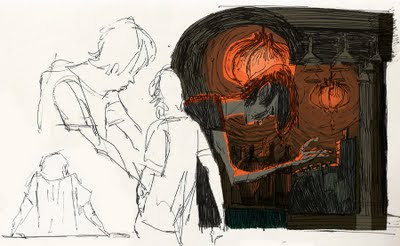 this is just me needing to draw something...bleh. 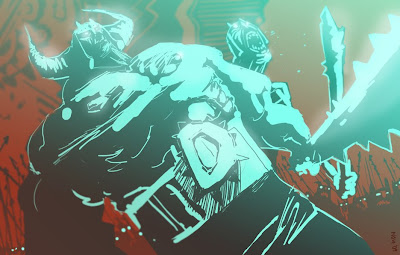 i don't really want to get into myself and what's happened over the last bunch of months. stuff has happened and other things. life is good.

had some down time working with my friend jahmad at his studio ILLWORKZ!, so i just straight aheaded a little animation, then colored it, and put some music to it. hope your head hurts when you're done watching it.

also, i started a VIMEO account, so you could check out all the films i've done thus far if you want. i think they've got way better quality. 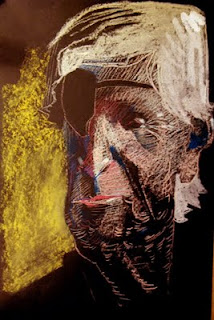 first things first...i know i haven't been here in a while so it's only deserving that the first thing i talk about is the sad passing of my teacher Mike. Where CalArts will be after this great loss i haven't a clue. all i can say is how far it had come with Mike in the picture. and speaking for myself, he was a real blessing to my growth as an artist and thinker.

entering into his figure drawing class, held in the Palace, for the first time i was slightly nervous. the automatic vibes of the classroom went beyond just merely understanding the human figure. the lighting was very dim, kinda gloomy. empty black walls with piles of props and garbage and old drawings in the corners. and just a few drawing horses to sit on. i sat on the ground. drawings started at two minutes, then to fives after a while. i wasn't sure if i was getting the hang of it. looking around it seemed i wasn't alone on that one. when mike asked the model to start the new set with tens i panicked. he then asked a few guys to move that old old motor cycle onto the model stand. i swear the whole room was confused. what the hell kind of FIGURE drawing class was this? mike made it to the middle of the room next to that motorcycle leaning on it a bit for balance. he started talking about observing the model, then looking at the shapes of shadows and light and composing it on the page. after his short lecture of metaphors and jargon i eventually started...and failed! i'm pretty sure that whole day was a fail. in fact i remember failing many a times in his class after that. he came over to me and mentioned how i looked pissed at the world. i told him i was having a bad drawing day. he just stared at me with his one blinking eye, then at my drawing , then at the model and said to look at the shapes. he pointed out what the light was doing when it hit her hip and how the shadow swallowed her whole left arm. looking at me blankly again he said, "ok? don't be frustrated. you're doing great." for some reason that was enough for me.

after that, mike's class became 6 hours of artistic searching and finding. i was looking at the figure model in a new and unique way. and when he thought you captured it he'd say his classic line, "that's the stuff," then steal it from you with little hope of ever seeing that drawing again. but it would leave you smiling for the whole weekend. of course digging through the stacks and stacks of drawings on his desk a the end of a semester in search of yours was no real picnic.

so, thank you mike for the bit of confidence and knowledge. i will truly think of you when trying to achieve the quality of "that's the stuff."

"dare to strike out and find new ground." -robin williams, DEAD POET'S SOCIETY
Posted by philip vose at 11:19 AM 2 comments: